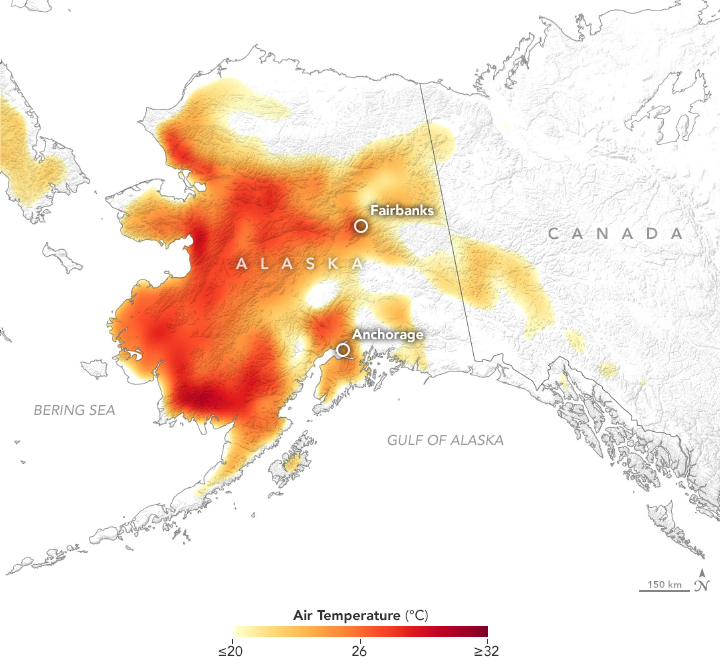 An upper-level ridge of high pressure that slid over Alaska in June 2019 unleashed a heat wave of astonishing intensity. With temperatures soaring into the 80s and even 90s (Fahrenheit) in some parts of Alaska, several all-time and daily temperature records fell.

Anchorage, Kenai, and King Salmon broke all-time records on July 4, 2019. In Anchorage, the record was not just broken; it was obliterated. The city reached 32°C on Independence Day; the previous record was 29°C on June 14, 1969. Daily temperature records have been kept for Anchorage since 1952.

This heat has also been unusual for how long it has lingered. Anchorage faced six consecutive days where temperatures exceeded 80 degrees, the longest stretch on record. The city broke daily high-temperature records eight times between June 23 and July 8. The normal daily high for Anchorage in July is 17°C.

The map above shows air temperatures at 2 meters above the ground on July 8, 2019. The near real-time temperature data come from the GEOS forward processing (GEOS-FP) model, which assimilates observations of air temperature, moisture, pressure, and wind speeds from satellites, aircraft, and ground-based observing systems. The darkest red areas had temperatures approaching 32°C. 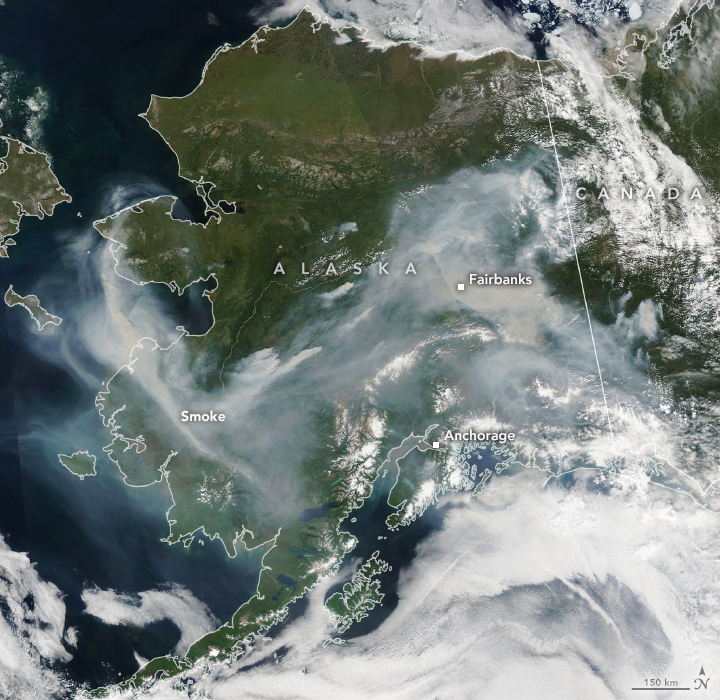 In many parts of Alaska, the heat has been accompanied by thick smoke. Clusters of lightning-triggered wildfires have been burning around Fairbanks since June 21, 2019. A second cluster began burning south of the Koyukuk Wilderness on July 5. Fires spread more quickly in hot weather because the amount of heat needed to warm fuels to the ignition point is lower. Fires generally burn with the most intensity in the afternoon, when temperatures are typically warmest.

The Moderate Resolution Imaging Spectroradiometer (MODIS) on NASA’s Aqua satellite captured an image of thick wildfire smoke swirling over the state on July 8, 2019. Meteorologists in Fairbanks reported visibility had dropped to less than one mile due to smoke, and air quality sensors in the city reported skyrocketing levels of particulates in the air. The photograph below, taken by a researcher from the Toolik Field Station, shows smoke obscuring the Sun along the Chena River in Fairbanks.