Certain estimates of Antarctica’s total contribution to sea-level rise may be over, or even underestimated, after researchers detected a previously unknown source of ice loss variability. In a new paper published in The Cryosphere, researchers using Copernicus Sentinel-1 data, found that glaciers feeding the George VI Ice Shelf speed up by approximately 15% during the Antarctic summer. This is the first time that such seasonal cycles have been detected on land ice flowing into ice shelves in Antarctica.

Although it is not unusual for ice flow in the Arctic regions to speed up during summer, scientists had previously assumed that ice in Antarctica wasn’t subject to the same seasonal movements. This was partly because temperatures remain below freezing for most of the year, but also due to the lack of systematic monitoring of ice flow over the continent’s ice margins.

Prior to the detailed records of ice speed made possible by Sentinel-1 satellites, scientists wanting to study short-term variations in Antarctic-wide ice flow relied on information collected by optical satellites such as NASA’s Landsat 8.

The advantage of radar as a remote sensing tool is that it can image Earth’s surface through rain and cloud, and regardless of whether it is day or night. This is particularly useful for monitoring areas prone to long periods of darkness. 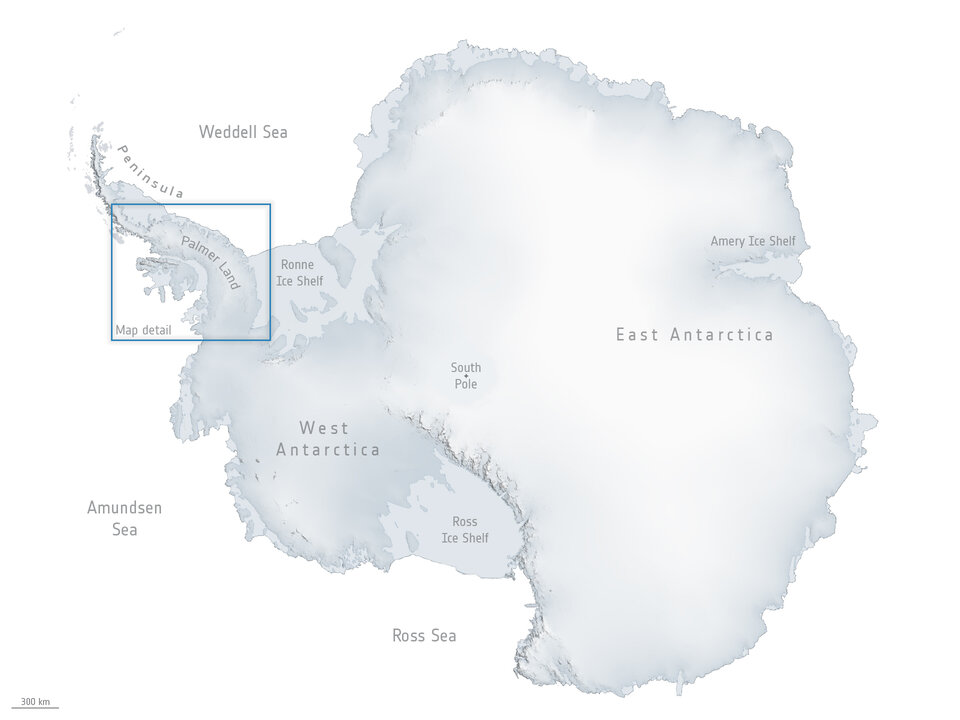 Thomas Nagler, co-author of the paper and ENVEO’s CEO, commented, “Optical measurements can only observe Earth’s surface on cloud-free days during summer months, but by using Sentinel-1 radar imagery, we were able to discover seasonal ice-flow change thanks to the ability of these satellites to monitor year-round and in all-weather conditions.”

The causes of these seasonal changes are uncertain. They could be caused by surface meltwater reaching the base of the ice, acting as a lubricant, or it could also be due to relatively warm ocean water melting the ice from below, thinning the floating ice and allowing upstream glaciers to move faster.

These results imply that similar seasonal variability may exist at other, more vulnerable sites in Antarctica, such as the Pine Island and Thwaites glaciers in West Antarctica.

Co-author Ian Willis said, “It’s the first time this seasonal signal has been found on the Antarctic Ice Sheet, so the questions it raises regarding the possible presence and causes of seasonality elsewhere in Antarctica are really interesting. We look forward to taking a closer look at, and shedding light on, these important questions.” Sentinel-1A was the first satellite to be launched for Copernicus – the Earth observation component of the European Union’s space programme. Carrying advanced radar technology and providing an all-weather, day-and-night supply of imagery of Earth’s surface, the ambitious Sentinel-1 mission raised the bar for spaceborne radar and set the stage for Europe’s Copernicus programme.

Mark Drinkwater, Head of the ESA’s Earth and Mission Science Division commented: “Systematic, year-round monitoring of Antarctica with the Copernicus Sentinels has revolutionised our insight into the variability in ice-sheet behaviour on shorter timescales than ever before.”